Never Thought About It 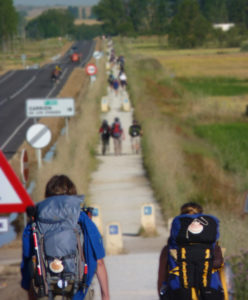 I grew up in a very devout, Christian family; the Bible was our source of authority and direction in all of  life. Strangely though,  the idea of pilgrimage played virtually no role at all either at home or in our broader, faith community. At church and school we learned of the ancient pilgrimage festivals of the Hebrews, and somewhere along the way, I read John Bunyan’s Pilgrim’s Progress, but that was about it. Pilgrimage was simply not a part of my religious landscape or even vocabulary.

At some point I did become aware that other traditions, even in my own faith, took pilgrimage quite seriously. More than an object of historical curiosity or some vague figurative thing, many believers actually incorporated literal pilgrimage into their religious lives.

Even so, as far as I was concerned, pilgrimage was inseparably tied to a purely transactional notion of personal salvation and forgiveness. The religious, or even not-so-religious, went on pilgrimage to pay penance for their sins, a kind of quid-pro-quo between God and the sinner.

A Change of Perspective

It wasn’t until I started to approach the practice within its own context and personally step into the community of pilgrims, myself, that I saw pilgrimage in a new light.  I had backpacked for many years, even walking the Appalachian Train in the late seventies. Heading to the Camino  seemed not really that different from a long hike. It might be fabulous, beautiful, and even exotic, but it was still just a long walk. In fact it seemed to be a considerably easier walk–no sleeping on the ground, no eating trail food for months, and no carrying a 30 pound pack day after day.

I was in store for a happy surprise.

From the very first day the Camino butted against all my expectations and stereotypes of pilgrimage. The difference was palpable and deep. I found myself caught up into something, some way of living, that was unlike anything I had ever experienced. With every step I felt more on the cusp of some kind of spiritual transformation. It wouldn’t be until we were back home that the power of the experience would start coming into focus; something really cool was happening to me.

Today, I believe that pilgrimage involves much more than just a fine walk. Properly understood it is a profound and life-giving experience that opens a person up to a new vision of themselves and the world.